Planets are large celestial objects in StarMade that populate the universe and are often used as bases of operations for players. 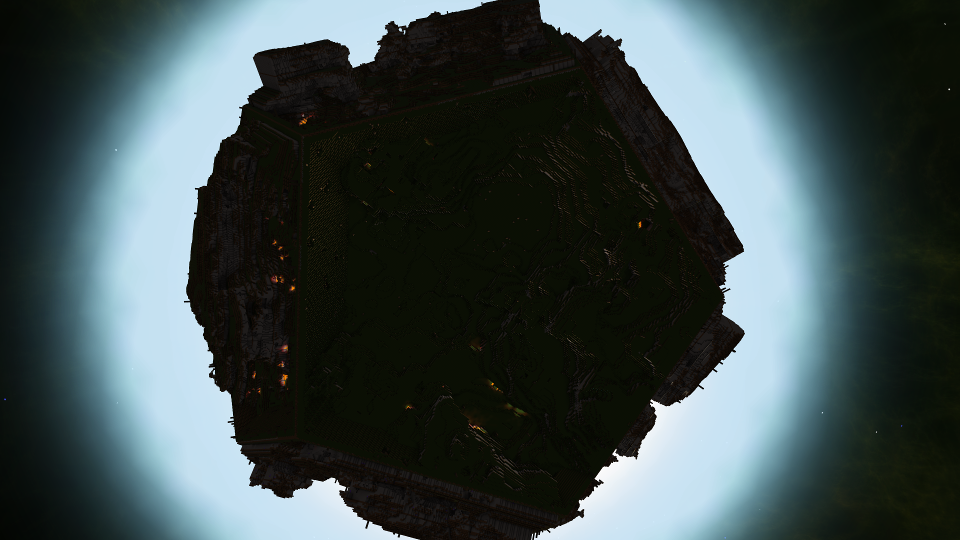 A terran planet from space.

Planets are massive Dodecahedron shaped entities that will only spawn in star systems. Systems with purple orbits usually, but not always, indicates the existence of a planet. All planets, no matter how big, will occupy their own sector. This sector uniquely rotates around the planet in order to simulate a day and night cycle. Planetary surfaces are made up of 12 pentagonal plates. Depending on the size of the planet each plate could contain anywhere from hundred of thousands to millions of blocks. Every plate is centered around a molten core, the churning mass that keeps the planet together.

Planets come in a variety of sizes. Each is generated with a random median radius which directly determines the size of every one of its plates. This radius is displayed as an "R" followed by a set of numbers (ex. R236). You can see this on a planet's name plate by selecting the planet using the F key. The larger the number the larger the planet. Theoretically this can be set as high as you like through the main menu, but will become much harder on performance if made larger.

Functionally planets act as pre-generated Space Stations. All station specific blocks can be placed on planets as well as allowing players to use planets as their home bases. If a player wishes to claim a planet for their faction, then they will need to place one Faction Module down on any plate and claim it. Once one plate has been claimed, all plates are claimed. If a player were to make a planet their home base, all plates will benefit from the invulnerability. Power and Shielding unfortunately do not transfer between plates.

Planets are an extremely good source of resources. When a planet spawns it will randomly pick 2 resources, either ore and/or crystal, to seed into each of its plates. Due to the massive number of blocks that compose a planet there is upwards of hundreds of thousands of units of resources depending on size. The more massive the planet the more resources it likely has. This can also stack with a factions 12x mining bonus if the player owns the star system.

Normal ship mounted salvage systems will suffice, however one should take caution when mass mining a planet. Massive mining arrays will likely harvest hundreds of blocks a second and because of this it can cause massive slow downs for the game. When massive amounts of blocks are being harvested at once the framerate can dramatically drop even to single digits depending on your computer specs.

Planets are unique in the way that they generate their own gravity. Any entity that flies too close to a planet's surface will become trapped in its gravity well and fall into it. This gravity is generated on a per plate basis, each plate has its own gravity well that contributes to the entire planetary well.

Much like real life it is harder to escape a planets gravity then it is to enter it. The distance of a planets gravity well is based on the maximum height of its plates. The tallest plate on the planet will generate the maximum distance the gravity well extends outward. Thankfully this distance is preset when a planet generates and will not be affected by any structures that are built on the planet.

While very difficult to do so planets can be destroyed. A planet is destroyed when its molten core has had its HP depleted. By default, all planets have 10,000,000 Hit Points but have an extremely fast healing rate. Damage is only registered if weapon fire hits the core; damage to individual plates does not count towards the planet's HP and only destroys blocks.

When the core has run out of HP then the planet will explode, causing all of its plates to be jettisoned into space. After a while each plate will slow down and become artificial "islands" in space. Even though they are no longer attached to a planet, planet plates still retain their gravitational pull. While in this state the plate effectively becomes a natural space station and can be faction claimed.