In StarMade, most systems on ships, stations, and other structures require power to function. To generate power on your vessels, a reactor is required. These reactors can range from absolutely tiny at a few blocks large, to infinitely large, and reactor setups have an equally large range of complexity.

There are four components to reactors: Reactor Power blocks, Reactor Stabilizer blocks, and reactor Chambers and their connecting conduits.

A reactor that consists of 10 or fewer reactor blocks is the simplest reactor possible in the game. As long as your reactor is 10 blocks or fewer, it will function normally on its own, and does not require any Stabilizers to operate at full capacity.

Reactors above 10 blocks in size require Stabilizers. Stabilizer groups need to be placed at a certain distance away from the active reactor to bring the reactors efficiency, or max power generation, up to 100%. The number of stabilizers required for a reactor, and the distance at which they must be placed to be effective, are determined by the size (block count) of the reactor. Stabilizer distance in relation to the active reactor is shown on the screen in build mode when stabilizer blocks are selected in the toolbar. 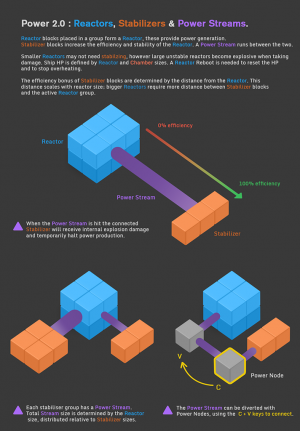 To build a relatively basic reactor that is larger than 10 blocks you are going to need reactor blocks, stabilizer blocks, and power node blocks.

First, choose the placement and guesstimate the size of reactor that you are going to need.

The chart to the right is a developer-published visualization of the reactor, reactor stabilizers, reactor streams, and reactor nodes.

To decrease the distance that each stabilizer group needs to be placed on either side of the main reactor group, stabilizers can be placed in zones which correspond to each of the 6 cardinal directions (up, down, left, right, forward, behind) of the reactor. When stabilizer groups are placed in multiple directions from the reactor, two new pieces of information will show up on the reticule. The first is 'Stabilizer Bonus Slot' and the second is 'bonus efficiency compared to biggest stabilizer'.

Using this mechanic the total distance away from the reactor required for the stabilizers can be decreased to 20% distance across all 6 sides while still maintaining mass efficiency.

Information on legacy power systems can be found here. However, it is strongly recommended that you no longer use legacy power. It currently remains in-game for compatibility reasons, however it is largely unsupported, and will be fully deprecated in the future.