Difference between revisions of "StarMade"

StarMade is a 3D sandbox space shooter created by Robin "schema" Promesberger, founder of Schine. The game allows players to explore the vastness of space; creating ships, space stations and structures out of various block types.Planets and stars also inhabit the game-space, which players can explore with their crafted vessels. The game supports singleplayer worlds and connection to multiplayer online servers.

StarMade is exclusively developed by schema, with various other members of Schine working on external projects or game assets such as textures from Tom Berridge and 3D models from Keaton Pursell.

StarMade is available to play for free, with the option to purchase the full version. Future restrictions to the free version are planned but have not currently been implemented. 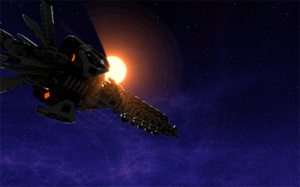 In StarMade, the player explores an endlessly generated voxel universe, in a player created spacecraft. This universe contains randomly generated galaxies, star systems, wormholes, planets, asteroids , space stations, shops, and spaceships, including stations and ships owned by neutral and non-neutral entities. Each planet is randomly generated with a planet biome. There are several planet types which include Terran (grassy), Ice, Desert, Alien and Red Planets. Players can customize their ships with thrusters and jump-drives, and make use of wormholes and jump-gates to decrease the travel time around this virtually infinite universe.

Players can create a ship with a Ship Core, which they can then customize in the game's "Ship Build Mode", or add materials in the default player mode, outside of the ship. Ships can be customized with a variety of block-types to enhance performance, add new features or create combat/defense systems. The universe is populated with other astronauts and ships such as Pirates, which can be killed to salvage materials from their destroyed ships. Pirates are hostile entities which will usually attack on sight if ships are equipped with a weapon system, while unarmed ships are less likely to provoke Pirates. There are a variety of customizeable weapon systems, such as missiles, beams and cannons, which can be combined to create unique systems, and can be further modified by adding an effects system, such as Explosive, Ion, Overdrive, and others.

Crafting is present in the game, and is known as "Manufacturing". Players can craft parts with blocks called "Factories". Each factory-type has its own inventory and specific list of items that only that type of factory can manufacture. Factories require power in order to manufacture parts. Once a factory has been powered, players can select an item to produce from a list and place the required ingredients into the factory, after which it will begin producing units at a set interval. Factories can be enhanced to produce more than one unit per production interval, and can also be linked to inputs and outputs to create a production chain. Players can collect resources used in manufacturing from all over the universe, and can mine anything by hand, or by using a ship that has a Salvage Computer and at least one Salvage Module installed. 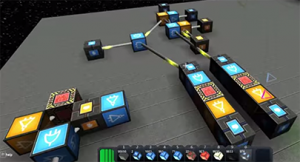 Sandbox on StarMade is the primary playing mode, used for single player gameplay. Players must gather natural resources (such as ore, crystal, etc.) or salvage spacecrafts and Neutral Stations found throughout the universe in order to craft certain parts and items using manufacturing modules. The mode also features a health bar which is depleted by attacks from pirates, astronauts, and eventually, being exposed to space outside of a ship for too long. Players also have a Power Bar, which is used to display the power of the ship being piloted. Power is necessary for any technology and can be generated from Power Reactor Modules.

There are a wide variety of items and parts that players can manufacture in StarMade. Players may also buy and sell parts or any resource in the randomly spawned shops with the credits currency.

The game has an inventory system and players are limited to the different number of items they can carry. Upon dying, the player will lose a portion of their credits as long as spawn protection isn't active, and players will respawn at their current spawn point, which is, by default, the first shop where players begin the game, but can be modified if a player sets their spawn point with a PlexUndeathinator.

Multiplayer in StarMade is available through player-hosted servers and allows multiple players to interact and communicate with each other in a single universe. Players can also run their own servers on a personal computer. StarMade multiplayer servers are guided by server admins, who have access to server commands, such as spawning items, or warping to players and ships. Admins can also set up a whitelist to define who is allowed to enter the server by values such as usernames or IP addresses. Multiplayer servers offer players a wide range of cooperative and competitive activities, such as role-playing, building ships with others, building bases. Some servers even have their own unique rules and custom blocks.

Robin Promesberger announced he had begun development of StarMade around 2010, describing it as a "Minecraft inspired 3D sandbox space shooter.” The game was primarily inspired by the feel of Minecraft and various space themed TV shows. Promesberger had been developing the engine behind StarMade for almost a decade. In mid 2012, Kevin "Beetlebear" Collins joined StarMade and helped redesign the textures of the game, until he later decided to leave development on September 15, 2013, due to a disagreement in his share of the game's revenue with Promesberger. On November 2, 2013, it was announced that Keaton Pursell would be working on 3D Models for the game.

On July 24, 2013, StarMade was greenlit by the Steam community and was made available for purchase through Steam on November 27, 2014.