Warp Gates are Space Station or Planet based systems that can allow players to travel vast distances in a instant. Warp Gates have a default range of 64 sectors (4 systems). This range may be increased up to 216 sectors with FTL chambers. 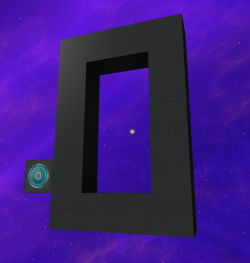 Example of a valid gate design 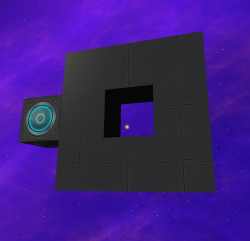 Some examples of invalid gate designs.

Top: Gate is missing a block that would complete the loop.

Bottom: An additional block is placed along another plane, breaking the 2d loop.

Example of some flying text indicating the current state of the warp gate.

A Warp Gate is a transport system which can connect two physically separate Space Stations, allowing ships and Players to teleport between the two as long as the entity can fit within the physical boundaries of the gate, and as long as the entrance gate is receiving sufficient power. ((B*10)^1.3) where B is the number of Warp Gate Modules by default. The term "Warp Gate" is technically applicable to each individual gate, but without another gate linked to it, a single gate has no function. (A gate may link to itself)

Each Warp Gate is composed of one Warp Gate Computer linked to a number of Warp Gate Modules. For a Warp Gate to function, the Warp Gate Modules must be arranged in a physically-contiguous ring, or other closed profile (eg. square, diamond, etc), with all of the modules aligned on the same plane. Any 2D shape which forms a closed profile is technically compatible; the only requirements are that all modules lie on the same plane, and that all modules touch exactly 2 other modules. If the shape is invalid then the warp gate computer will display flying red text telling the player so.

When a ship flies through a warp gate it will instantly be transported to its destination regardless of the dimensions and power status of the destination gate so long as it is within range of the entrance warp gate. A 2x2 unpowered warp "gate" will work as a destination, but it's a one way trip.

Once the the ship has passed to the other side it will actually be teleported near the receiving warp gate. This is to prevent an potential collisions with other ships or entities that might be on the other side. 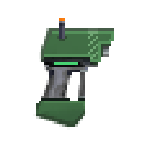 Warp Gates must be linked to each other using a Marker Beam. This is an Astronaut Tool used for inter-structure linking. To link a Warp Gate, follow the procedure below: