Weapon Systems in StarMade are used to deal damage to entities, be they players, ships, stations or other. Successful combat depends on both correct design and utilization of weapon systems.

Each weapon system consists of a computer linked to at least 1 module of the same type (Cannon Computer with Cannon Barrel, etc.). Weapon modules in a physically-contiguous grouping are considered one group, and will output 1 projectile (unless modified otherwise). Larger groups have a directly proportionate increase in damage output and power cost per firing of the weapon. Although several groups can be linked to one computer, the total power cost is increased by 10% for every subsequent group for cannons and beams, and by 2.5% for missiles. Damage pulse has no penalty for multiple groups linked to the same computer.

In each group, one block is defined as the "output": the location from which projectiles are emitted. The output of a group can be changed by aiming at the desired block and pressing R. The text which appears while aiming at a block will read "[R]: Make Output (CURRENT)" if that block is the current output for its group, and "[R]: Make Output" otherwise. The direction in which a weapon fires, relative to the ship it is on, depends on the orientation of the primary weapon computer. Because of this, players should be sure to place weapon computers in the default orientation unless they intend to make a weapon with non-standard characteristics (eg. vertical-launch missiles).

Each weapon has the following general behaviors when used as a primary weapon. These are largely self-explanatory.

Although the majority of the Support Tool Systems are, indeed, for use in supportive roles, a few of them are specifically useful as offensive tools, and are therefore detailed on this page. Those support tools which have offensive applications are detailed briefly in the table below.

The statistics of a weapon system can be modified by linking to other weapon systems or effects. Each weapon may only support 1 secondary and 1 tertiary system at a time.

In linked weapon setups, the primary system is commonly referred to as the "master", with secondary and tertiary systems being termed "slaves". Only weapon systems can be used as secondary systems, not support tool systems. Secondary systems provide the bulk of statistic alterations, affecting at least 2 of the following values: damage, power consumption, range, projectile speed, and projectile quantity. Secondary (and tertiary) systems are a trade-off: For example, a beam system slaved to a cannon quadruples the damage of the cannon, and doubles its projectile speed, but also quadruples both reload time and power consumption.

Slaved systems lend their block-count to the primary system for purposes of damage and power calculations (which are linearly calculated per block), but do not act independently when slaved (they do not emit projectiles, and only the primary system is added to the hotbar and fired).

Weapon systems can also have effects linked to them as tertiary systems, providing further modifications to weapon stats. These usually change what the weapon does with its damage output: for example, draining enemy power or shields, in exchange for dealing less block damage.

A secondary system is a weapon system which is slaved to another weapon system or support tool system, modifying its statistics based on the combination and the proportions thereof.

Each weapon system has the following general effects when slaved to another weapon:

A tertiary system is an effect computer slaved to a weapon system. For the purposes of any per-module cost or value (damage and power consumption), effect modules increase the effective module count of the primary weapon, up to the same limits applied to secondary systems (cannot exceed 100% efficiency). Effects apply all of their modifications after total block count is found (and the stats before effects are calculated), including Overdrive's damage and power consumption increases.

Each effect system has the following general effect when slaved a weapon system:

The projectile or effect color of any weapon can be altered by linking the primary weapon computer to any light emitting block.

Values in this section may be subject to change. This disclaimer is here to mark which StarMade version this is in accordance with, in order to prevent misinformation.
This section is up to date with: StarMade v0.199.654, 22nd August 2017.

The table below offers a very brief summary of the effect which a given system will have when given a particular secondary system:

Due to the large number of different values involved, information on weapon combinations is presented in relatively complex tables in the following sections. To ensure clarity, the structure of these tables, and specific meanings of the terms used, are specified herein.

The first subsection of each table, "Primary Stats", details the base statistics of the weapon, without any slaves. The first column states the value, and unit thereof, for each row. A breakdown of these values is below:

Next, the second section, "Secondary Stats", shows the values for the given weapon, when affected by the stated secondary system (as specified by the column header) at 100% effectiveness.

The following table details the statistics of weapon systems, as well as their statistics when modified by secondary systems. Bear in mind that the minimum block count for a weapon with 1 slave (secondary or tertiary) is 2, and is 3 blocks with 2 slaves (secondary and tertiary). See the Support Tool Systems section for descriptions of the effects on those systems. 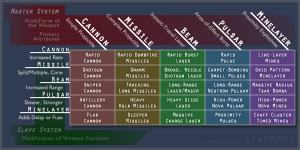 An old chart displaying planned weapon combinations for StarMade v0.15; note the mention of Mine Layers.